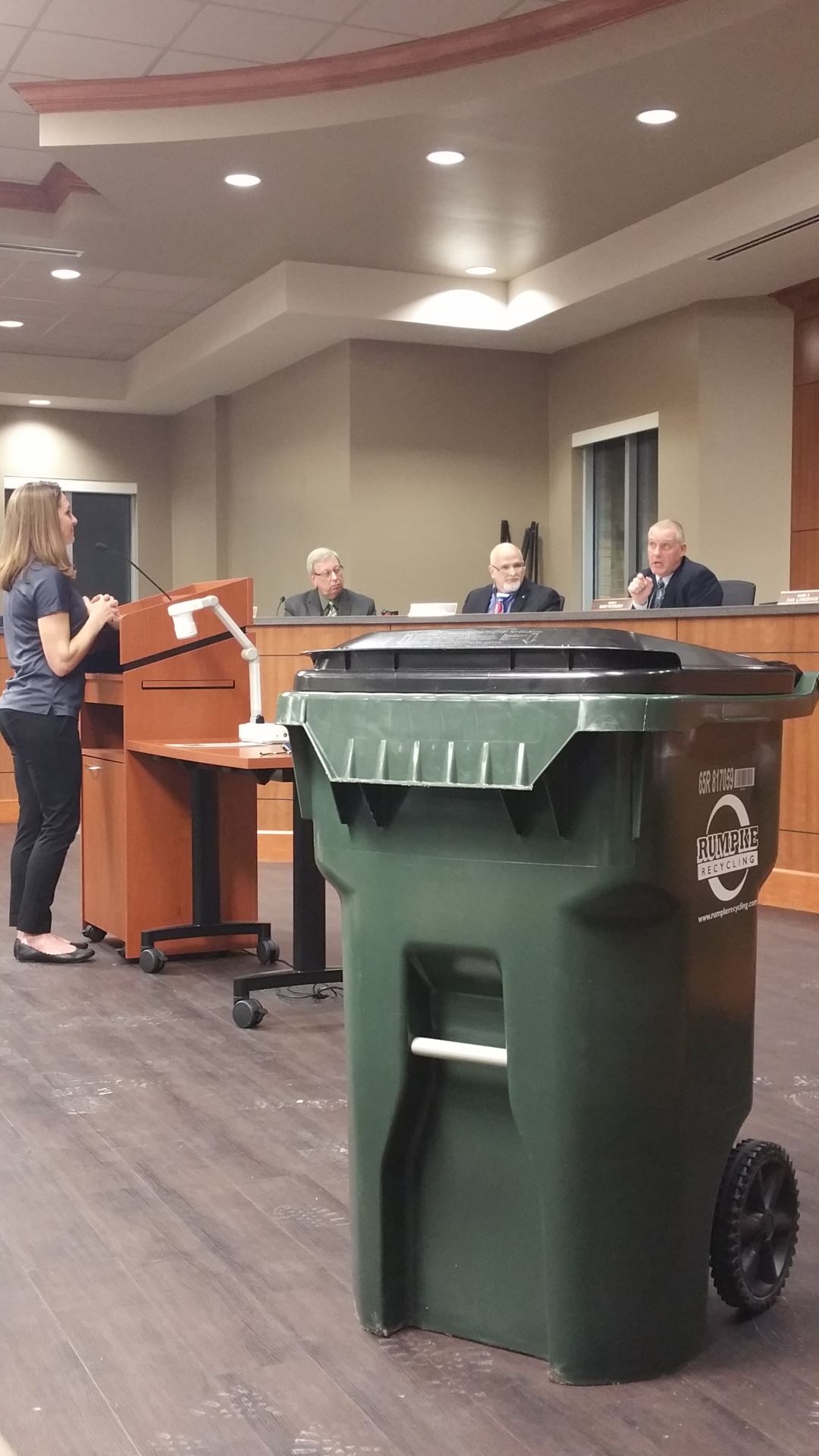 City officials ask Jessica Fenos, planner for the Cuyahoga County Solid Waste District, questions about recycling and get a feel for the true size of the 65-gallon recycling can or cart, in the foreground, residents would use if council opts for a semi-automated contract with Rumpke. Photo by JAIME ANTON
PREVIOUS IMAGE


NORTH ROYALTON – After reviewing pricing for the new rubbish proposal, city council has narrowed the three methods of trash and recycling collection to semi-automation of recycling, a move that could save tax dollars.

A final decision is expected Jan. 17.

The current five-year contract with Rumpke Waste and Recycling expires in May, so the city sought bids for a new contract with three collection methods to compare: manual pick up as it is currently for trash and recycling; semi-automation, which is manual trash and automated recycling; and full automation for both.

Rumpke, Kimble and Republic Waste Services all bid, and Rumpke was the lowest and best bidder for all three methods.

The administration presented council Jan. 3 with not only the five-year total cost of the proposed contract and a yearly breakdown with each company, but also five scenarios with Rumpke, each detailing costs should resident recycling participation remain the same and if it were to increase by 10, 15, 20 and 30 percent.

Rubbish costs the city not only for collection but also disposal, so the more residents recycle, the less trash and money wind up in the landfill.

As part of Rumpke’s proposal, manual pick-up would cost $7.3 million total for all five years combined, of which $2.6 million is disposal. If the city were to instead move to semi-automation of recycling only and provide residents with a 65-gallon bin but recycling participation remained the same, it would cost $7.7 million. Full automation would cost $8.2 million.

Jessica Fenos, planner for the Cuyahoga County Solid Waste District, and Bob Havenga, district manager for Rumpke, both attended the meeting and said when residents are given these recycling containers, recycling participation easily increases by 40-45 percent.

“It’s easy to move, I know it looks big and hard to move but it’s not, it contains everything so things aren’t blowing around and it increases (recycling) participation,” Fenos said, referring to the container.

Ward 2 Councilman Gary Petrusky and Ward 6 Councilman Dan Kasaris have expressed opposition to automation primarily because of concern by some that seniors in particular would have a difficult time and risk injury pushing bins down long driveways in rural parts of the city. Bin storage is another complaint.

Petrusky said during the meeting, he’s not sure the savings of even semi-automation is worth the hassle it will be, based on constituent feedback.

“I don’t believe it’s worth it,” he said. “And there’s no guarantee recycling will go up.”

Mayor Bob Stefanik said a savings is a savings.

Havenga said any community moving to automation experiences push back initially, but it subsides quickly. Bath Township, a rather rural community, just converted to automation.

“And they have increased recycling to the 40 percent level,” he told Kasaris who asked if rural residents participate in recycling as much as those in subdivisions.

Stefanik said people are afraid of change, but if the city doesn’t start reducing the disposal fee by recycling more, it might become one of the nearly 20 other municipalities in the county who charge residents for rubbish.

“My mother-in-law is 94 and my father-in-law is 90, and they pull their cart out to the curb. It can be done,” he said. “The cost at the landfill is going up. Would residents rather have this or pay for rubbish? It could come down to that. We are trying to save our taxpayers’ money at the end of the day.”

“What we are doing now is not working because North Royalton is sitting on the bottom in the county (for recycling),” Antoskiewicz added. “This will be a good test. It’s a smaller can, and we can get a feel for how (automation) is working so in five years we have a good idea.”